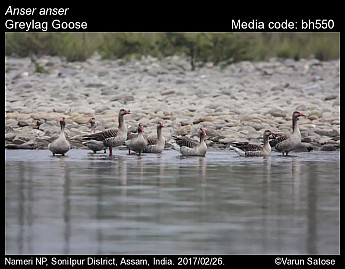 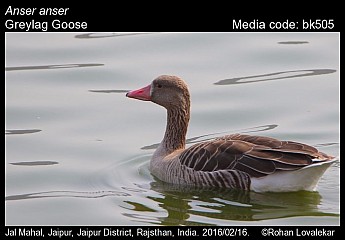 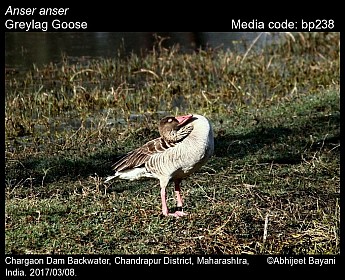 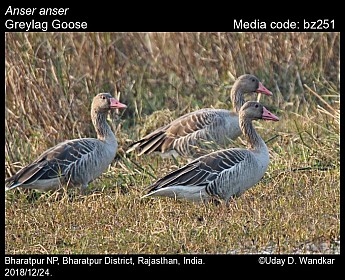 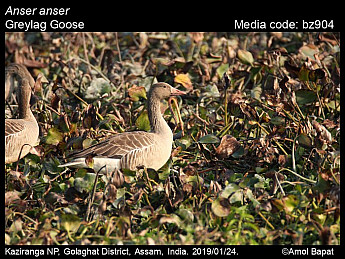 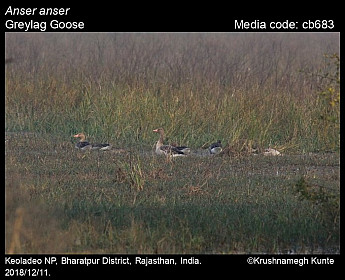 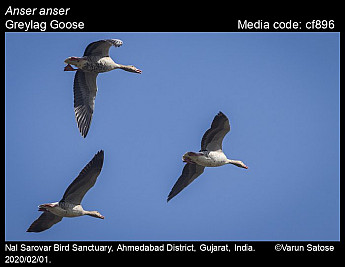 Nest: Nests made of twigs and grasses on ground near the marshes, lakes and coastal islands.

Adults: It is a large ashy-brown coloured goose with pink legs and beak, white nails and whitish margins to feathers of upperparts, flight feathers and flanks. Show frekles on the upper neck.
Young/Immatures: Similar to adults, with pale beak and feet.

(1) Greater white-fronted Goose (differs from Greylag by having broad white band in the front of the head i.e. at all the sides of base of beak, black barrings on belly and yellow legs).

(2) Lesser White-fronted Goose (differs from Greylag by having white band at the front of the head, distinct yellow-eye ring, yellow legs and smaller size).

(3) Bean Goose (differs from Greylag by having overall darker grey plumage, black beak with small yellow band, and yellow legs). This species is vagrant in India.

(4) Domestic Goose (Anser anser domesticus) is domesticated variety of Greylag goose which appears in variable colouration that may range from uniform brown to uniform grey, but lacks pink legs and beak.

Sexual, seasonal & individual variation:
There is no distinguishable individual variation or seasonal variation in this species. Sexes are alike.
Status, Habitat and Habits:
It is gregarious species that aggragates in the large flocks, often found along with Bar-headed Geese, Greater and Lesser -white fronted geese. Usually active early in the day, resting during afternoon and active again by evening.

2. Ali, S., and S. D. Ripley. 1978. Handbook of the Birds of India and Pakistan: Together with those of Nepal, Sikkim, Bhutan and Ceylon (Vol. 1). Oxford University Press.

3. Stuart Baker, E. C. 1933. The Nidification of Birds of the Indian Empire. Taylor And Francis.