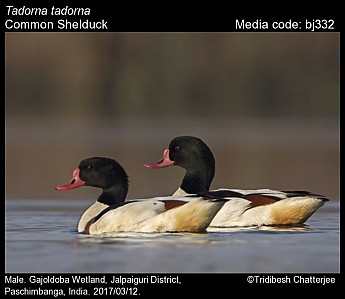 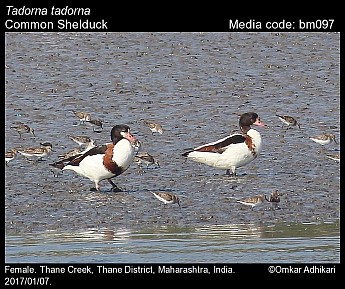 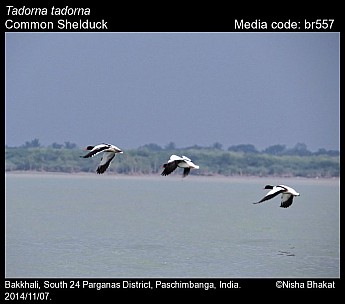 Nest: Nest made of grass, moss in natural crevices/cavities such as hollow trees, burrows or holes on the cliffs.

Similar species in India: This species can be confused with following

(1) Mallard (male): Can be distinguished by its overall small size and yellow beak.

(2) Falcated Duck (male): Can be distinguished by its smaller size and black-grey beak.

(3) Northern Shoveler (male): Can be distinguished by its smaller size, flat/spatulate black beak, blueish band on wings and pale iris.

(4) Goosander (male): Can be distinguished by its long neck, white breast and belly, comparatively long beak.

Sexual, seasonal & individual variation:
It is a sexually dimorphic species. Males can be distinguished from female by having a dark pink (same colour as its beak) knob on its forehead, which is absent in females. Females are also duller in colour.

There is no recognisable individual variation in this species. It also remains same across breeding and non-breeding season.

Call/Song: A clear whistle by male and a harsh short quack by female.

Migration Status: Migratory. It is a winter migrant in northern and eastern parts of India.

2. Ali, S., and S. D. Ripley. 1968. Handbook of the Birds of India and Pakistan: Together with those of Nepal, Sikkim, Bhutan and Ceylon (Vol. 1). Oxford University Press.

3. Stuart Baker, E. C. 1933. The Nidification of Birds of the Indian Empire. Taylor And Francis.