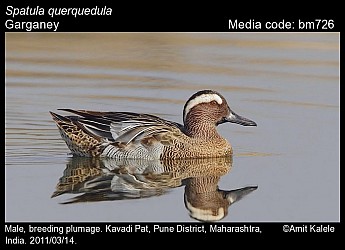 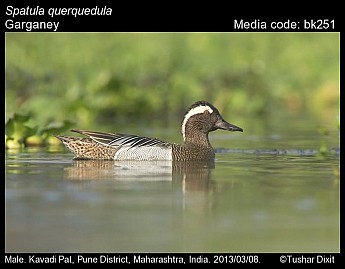 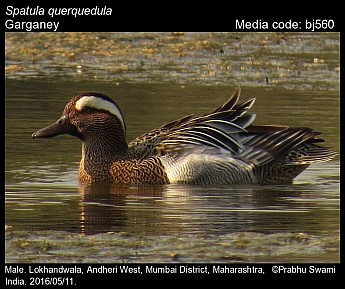 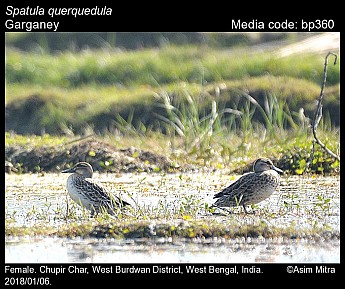 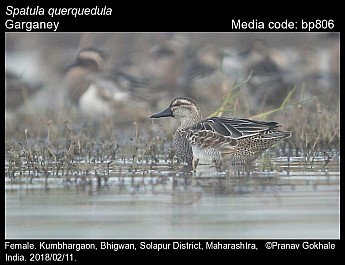 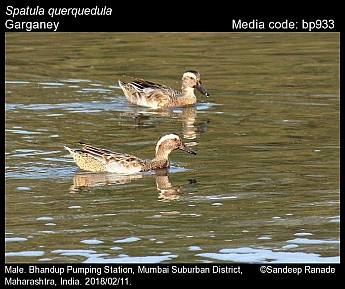 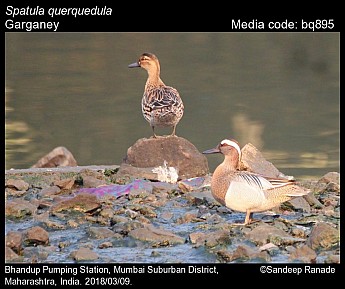 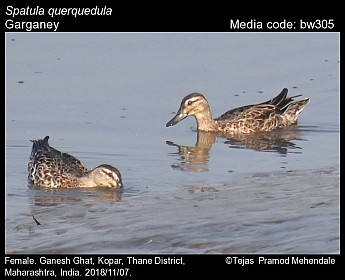 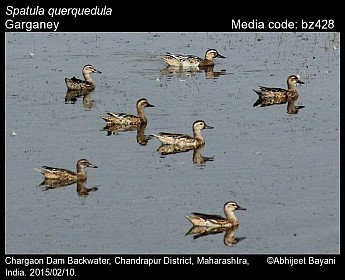 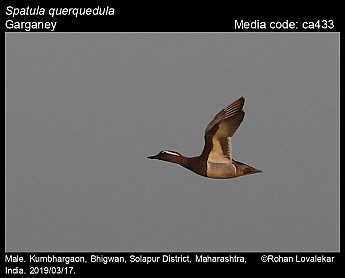 Nesting/juveniles:
Breeding season: April-May, Pair-bonds usually began in winter, even as early as September-October.
Nest: It is well concealed depression in wet meadows or grassland. It is made on ground and often lined with plant material, some feathers (sometimes their own). Nest is preferably constructed among grass or reeds near water.
Eggs: 7 to 16 eggs in a clutch. Eggs are creamy buff with a distinct gloss. Size 40–50 mm × 30–36 mm.

Young/Immature: Resembles female but darker with browner underparts. Lacks the white eyebrow, if present, not distinct.
Similar Species in India: Males in breeding plumage are distinctive, but females, youngs and males in eclipse plumage are very similar to many other dabbling duck species found in India. Garganey can be best told apart from all other similar species (i.e. Gadwall, Falcated Duck, Mallard, Northern Pintail, Northern Shoveler, Common Teal, Baikal Teal, and Andaman Teal) by its broad white eyebrow and unique colour of its speculum.

Status, Habitat and Habits:
Breeds mostly inland, on swampy meadows, flooded fields and shallow freshwater marshes, pools and small lakes with abundant emergent vegetation, including in farmland. Winters in coastal marshes or lagoons of both fresh and brackish water, provided there is some partially submerged and well-developed fringe vegetation; also, on reservoirs, rice paddies, whereas marine. non-diving duck, though to escape predator. Found in in close-packed flocks.
Foraging Behaviour: Garganey is a dabbling duck, it does not dive for foraging, but rather feeds on the surface of water. It is mainly herbivorous and its diet include seeds and tender shoots of marsh plants, grasses and sedges, and grains of wild and cultivated rice. It also feed on water insects, larvae, worms, molluscs, etc.
Song:Usually very silent and vocalizes only during breeding season male gives harsh rattling or crackling note similar to breaking ice, e.g. “rrar ... rrar ... rrar”; female utters low quacking note.
Migration Status: Migratory, A common winter visitor to all parts of India.